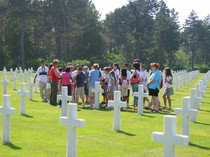 These Tours are suggestions. Contact me I will suggest you propositions of tours by combining different sites or themes together according to your wishes and time you do spend in Normandy.